In my first job out of college, I read a book called “Getting Things Done”.

The book unleashed a massive wave of inspiration in me. I had visions of being a relentless executive, churning through new initiatives at a furious rate.

And then I didn’t.

You see, it turned out that in my first job out of college, I really didn’t have a whole lot to manage. My job was more about focused reading and writing than handling a firehose of emails, phone calls and texts. I received a handful of emails a day.

The boss was a sun-tanned, relaxed German lawyer in his late sixties. The office was less Wall Street and more like a sleepy, academic ivory tower.

There was even a well-stocked wall-to-wall library in which you could read quietly for hours on end. Honestly, working fast was looked down on as the sign of an unrefined mind.

I’d picked a productivity system that simply wasn’t the right one for my situation.

The point is that it’s all about finding the right system for your situation.

A technique for handling hundreds of emails a day is hardly going to help you if you receive about 10 emails a day. But if you need to focus on solving a hard problem over a longer period, the Pomodoro technique will be a great fit.

Today we’ll go through 6 different productivity systems, and we’ll identify the strengths and weaknesses of each.

David Allen wrote a book with the same title back in 2001. As far as systems go, GTD is a monster of a one. It’s typically explained with the help of process flow charts.

It’s designed to be an all-encompassing system for every thing you need to do.

The five pillars of the Getting Things Done System:

The core of GTD is moving things you need to remember from your forgetful brain to a system that does the heavy lifting for you. The system organises your ideas, breaking them down into smaller chunks you can work on.

The interesting part about the Getting Things Done system is that it doesn’t specify any particular tool. That means that you’ll have a period of adaption as you fit the methodology to the tools you prefer to work with.

The best place to start is at the source: the Getting Things Done website.

I feel that this system is particularly suited to executives who feel like they’re “drinking from a firehouse” due to the amount of decisions, ideas, emails and tasks they face every day.

The Getting Things Done system and Planio work really well together. You create issues for each task, and you can group tasks using categories. In addition, you can add due dates for scheduling times to work on issues. You can also use priorities (high, medium, low) to see what’s important.

If you want to get very fancy, you can even have a workflow where issues get assigned to various statuses such as ‘Waiting on input”.

This system was dreamt up by a desperate Italian first year university student. He felt helpless against the feeling that he was wasting his time.

In the end, driven to distraction by his own procrastination, he grabbed a tomato-shaped timer from his kitchen, set it to 10 minutes and sat down to to work, only to discover that he couldn’t even focus on one task for 10 minutes.

Eventually, he found a way to improve his work processes to the point he could work consistently over time.

The method for doing that was the Pomodoro Technique.

In its basic form, you work for 4 x 25 minute sessions. You take a 5 minute pause every 25 minutes, no matter if you feel like it or not. If you’re interrupted in those 25 minutes, you start again.

After 4 sessions, you give yourself a 30 minute pause. That’s the core of the technique. You can find more about the technique at PomodoroTechnique.com.

Not So Great for:

What The Internet Bloggers Say About the Pomodoro Blog

“If you’re like me and need a guiding structure to your day and “permission” for when you’re to break, this is the system to use.” - Samuel Thomas Davis

How to Use with Planio

An issue tracker like Planio is perfect for the Pomodoro technique. You can log into Planio, see what issues you have open and then start the timer for 25 minutes on the highest priority. Planio’s time tracking works well for this. Often, if you’ve been procrastinating on an item, the reason is that task is poorly defined. You can spend 25 minutes on breaking the task down into sub-tasks and then start working on them.

Leo Babauta created Zen to Done for people who were having trouble with Getting Things Done. His system definitively borrows from GTD, but it also adds concepts from the book 7 Habits of Highly Effective People. It’s designed to be simple and focused on doing rather than focusing on the system.

You could think of it as GTD-lite.

Say goodbye to overtime and nights at the office.
Get your projects organized

This isn’t a productivity system that I’ve personally tried out. You can read more about the 10 habits over at Leo Babauta’s website.

Similar to GTD, Zen to Done will work with Planio. One aspect you might want to consider is whether you use a private project to manage your tasks, or whether you include your team in your project.

Brad Isaac tells the story of hanging out in comedy clubs, doing open mic sessions and trying to learn how to become a standup comedian.

One night Jerry Seinfeld was giving a show at his club, so Brad went up to him before he was about to go on stage. He asked him whether he had any advice for a young comedian trying to make it.

Seinfeld told him to get a huge wall calendar that has an entire year on one sheet and stick it up on a wall in a place he’d see every day. Every day, he’d write, and then he’d put a big red “X” on the calendar for that day.

After a few days, Seinfeld said, you’ll start to see a chain. Don’t break that chain.

The simplicity of this system is its strength. You’ll turn writing, painting or coding into a habit.

AutoFocus is a reaction against the idea that you should prioritise tasks based on priority.

Mark Forester, the man behind AutoFocus, wrote up his system based on years of practice with various different productivity systems.

In its basic sense, you write down your to-dos, including vague ones such as just investigating a new idea, on one lined page of paper. Then, you go through the list without any pressure. You then start working on the task that jumps out at you.

You work on the task until you don’t feel like working on it anymore or you’ve finished it. You cross off the item off the list. If it’s not yet finished, you add the task to the bottom of the list.

As you find that tasks are staying on the list without being finished, you then decide whether to cut that task from your list, break it down further or delegate it.

You’ll find more about AutoFocus over at Mark Forester’s website.

Not so great for:

Most people I know who are good at email use some variant of Inbox Zero. Merlin Mann outlined the ideas behind it in a series of blog posts back in 2006.

The fundamental insight is that email is a skill, and you better get good at it if you’re getting a lot of emails.

The problem is that your inbox is a gigantic ‘to do’ list that anyone in the world with your email address can add a random ‘to-do’ to as they please.

Your inbox is a gigantic ToDo list that anyone in the world can add to as they please.

This leads to people ending up with hundreds and even thousands of unanswered emails. They feel guilt and pain at the fact that all these emails are unanswered.

At the same time, they’re often in cognitive dissonance due to simultaneously believing they SHOULD answer all these emails and also knowing that objectively it ain’t gonna happen.

The Inbox Zero system is a mixture of principles and tactics that are designed to put you back in control of your inbox.

You’ll find in-depth guides and articles over at 43folders.com.

You can use the principles in Inbox Zero with Planio to be even more efficient.

Your inbox isn’t actually the best place to get work done. It’s hard to share tasks with other team members. Often emails are actually a bundle of different tasks, so they need to be broken down.

Your inbox isn't actually the best place to get work done.

You can automatically forward all emails into Planio using the CRM & Help Desk, and then you can use Inbox Zero to work through the emails, replying to emails directly from Planio.

Or you can forward individual emails that contain action items to your email drop box address in Planio.

Find the System That Works for You

So, there you have six different systems for getting in control. Not every system will fit everyone. You might feel that one doesn’t quite fit your needs.

The reality is that “silver bullets” don’t exist. You being productive is a process rather than a one-time event. You won’t spend a day with the Pomodoro technique and turn into a productivity machine.

One of these systems will, however, work for you if you put in the work. Choose one and let me know how it goes.

You being productive is a process rather than a one-time event.

How to work less and get more done

4 ways to get motivated when you don't feel like working 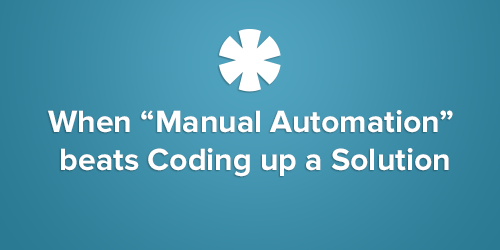 When “Manual Automation” beats Coding up a Solution