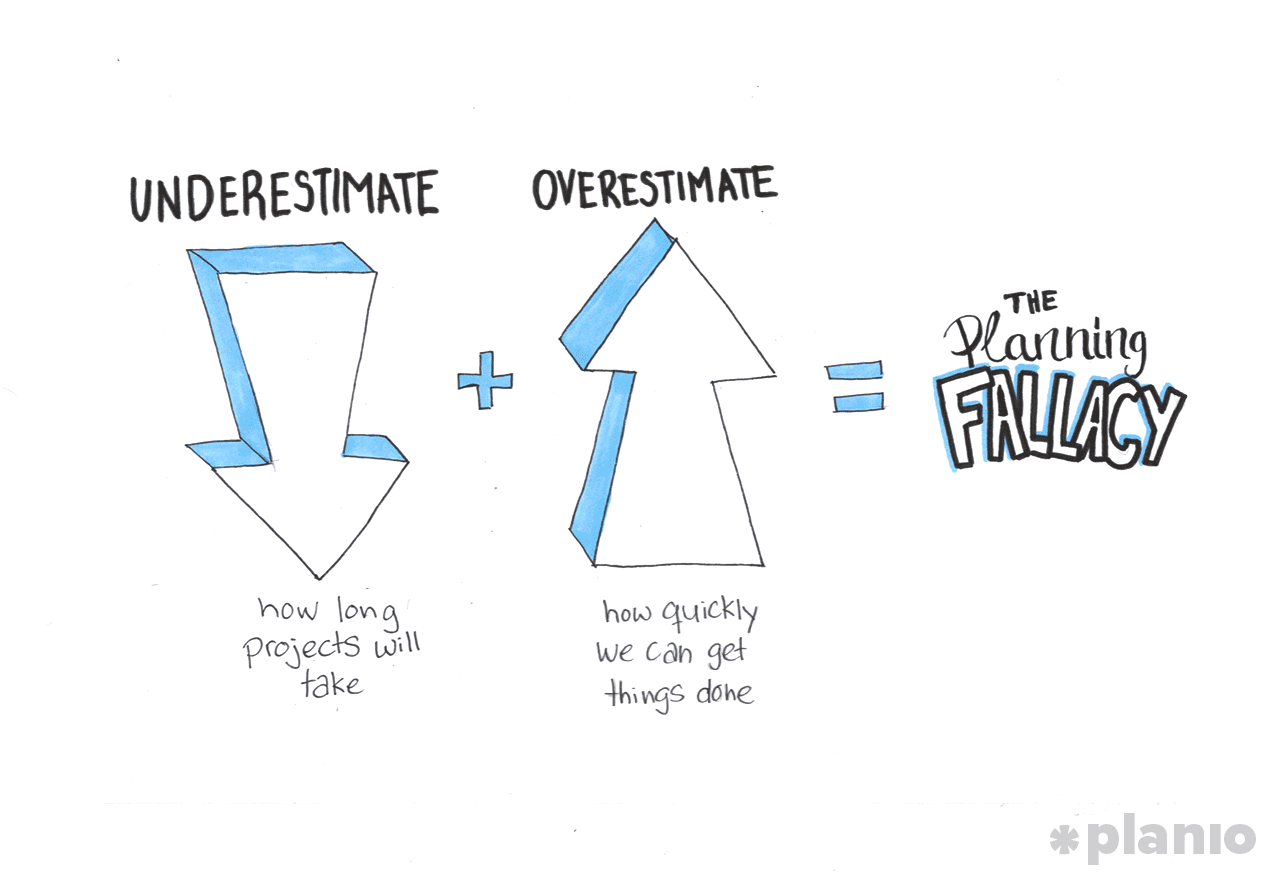 We like to think we're in control of our behaviour, our communication, and—perhaps most of all—our thoughts. And while that's generally true, there are some things that happen subconsciously, which we can't completely control.

Cognitive biases are essentially flaws in our thinking. Our brains have evolved to treat information in particular ways, or to lean in a certain direction when making decisions. These biases serve a purpose, but in modern life they can also trip us up. And because they're subconscious, we often don't even realize how our thinking has been affected.

While there are hundreds of cognitive biases that scientists have uncovered, the planning fallacy is one that affects most of us at some point. This particular bias can affect our productivity, how we work with others, and how we make decisions at work.

With a better understanding of how the planning fallacy affects our thinking, we can be aware of situations when we might be affected subconsciously, and try to avoid making decisions on autopilot that might not be our best.

In 1988, construction finally started on a project that was suggested as early as 1802: the Channel Tunnel between England and France.

The project's builders expected to see the first trains running through the tunnel by June 1993, but it was November of 1994—more than a year later—before the public were able to use the new construction. By the time the tunnel was officially opened, it was 80% over budget.

A similar story took place in Montreal in 1969. The mayor at the time, Jean Drapeau, announced that the city would build a state-of-the-art stadium for the 1976 Olympics, including "the first retractable roof ever built on a stadium." The entire Olympic building project was estimated to cost $120 million dollars.

How could professionals make such a huge mistakes in planning and estimating major projects like this? Well, they're only human, and like many of us do every day, they fell prey to the planning fallacy.

This bias in our thinking makes us underestimate how long projects will take, and overestimate how quickly we can get things done. Combined, those two mistakes in estimating leave us with unrealistic plans for anything from completing a small task to a multi-million dollar construction project.

I love deadlines. I love the whooshing noise they make as they go by. — Douglas Adams

The planning fallacy causes us to create plans that are unrealistic, and underestimate the costs and time needed to compete projects. This leaves us relaxing too much in the early stages of a project, as we think we have plenty of time to get it done, and later scrambling to hit deadlines that weren't realistic in the first place.

I love deadlines. I love the whooshing noise they make as they go by!

This fallacy can also cause tension among employees and their leaders, as unrealistic expectations from above cause stress among the team.

How to overcome the planning fallacy

To avoid falling into the trap of the planning fallacy, try to pad out your estimates and plans more than you think you need to, and adjust the way you think about deadlines. 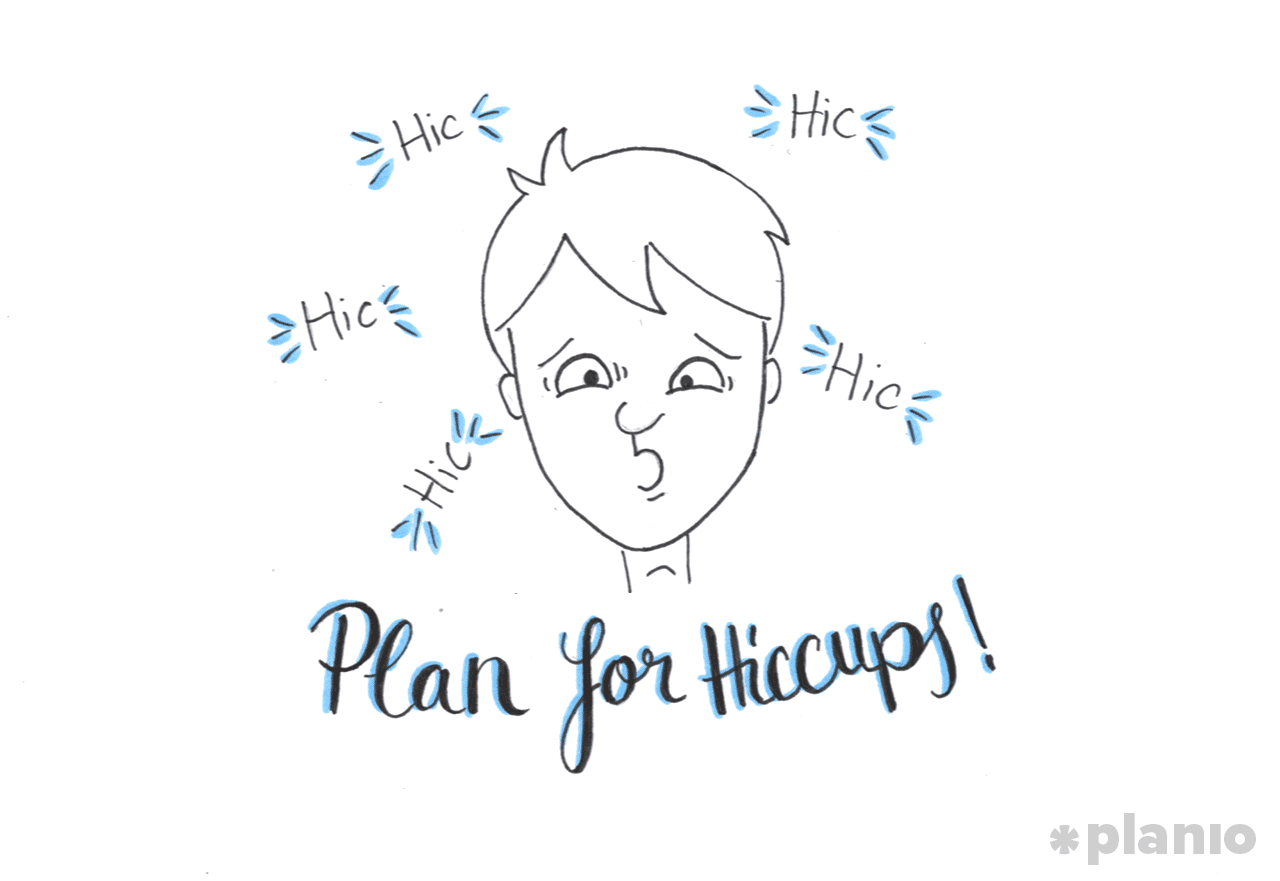 One of the reasons the planning fallacy trips us up so easily is that we always plan for the best-case scenario. When researchers asked people to estimate how long something would take if it progressed typically, and then how long it would take if nothing went wrong, the two estimates were almost exactly the same.

This shows that we tend to think of a typical scenario as being almost the same as a perfect scenario. But hiccups happen, and they throw us off course. To overcome this subconscious bias, try making a rule to consciously over-pad your estimates and plans.

Look to others for examples

Another reason we're too optimistic when planning is that we think our personal sample size of one is enough information to make an informed decision. But often, especially when dealing with a task or project that's unfamiliar to us personally, it can be helpful to gather information from others who've done this type of work before.

Psychologist and author Daniel Kahneman has been in this situation. He was once hired to lead a committee working on a new curriculum for Israeli high schools. After a year, Kahneman asked his colleagues how long they thought the project would take to finish, with one year of work under their belts. Most said somewhere around two years. But when Kahneman asked a colleague how long these type of projects had taken for other committees in the past, he found out that they usually took a minimum of seven years, and in fact, around 40% were never even finished.

Without looking at other examples, Kahneman may have expected the project to take three years in total, as most of his colleagues suggested. It actually took eight years, so five of those would have been very frustrating if the committee all thought they should have already been finished.

When you're facing a task or project you haven't worked on before, swallow your pride and ask around. Gather some statistics on how long these projects take for other people in a similar situation, to give yourself the best chance of a realistic estimate.

As Kahneman's example shows, focusing on the specifics of our current task or project can get in the way of realistic estimating. And while looking to others for examples can help, there's another way to broaden your thinking and improve your planning success.

Without taking the specific details into account, we're forced to rely on an intuitive guess about how long something will take. It's likely that in relying on our intuition we subconsciously take into account our memories of similar tasks we've done in the past. Though it's hard to accept, you're more likely to determine an accurate estimate this way, so try not to think about any of the specifics when planning a new project. 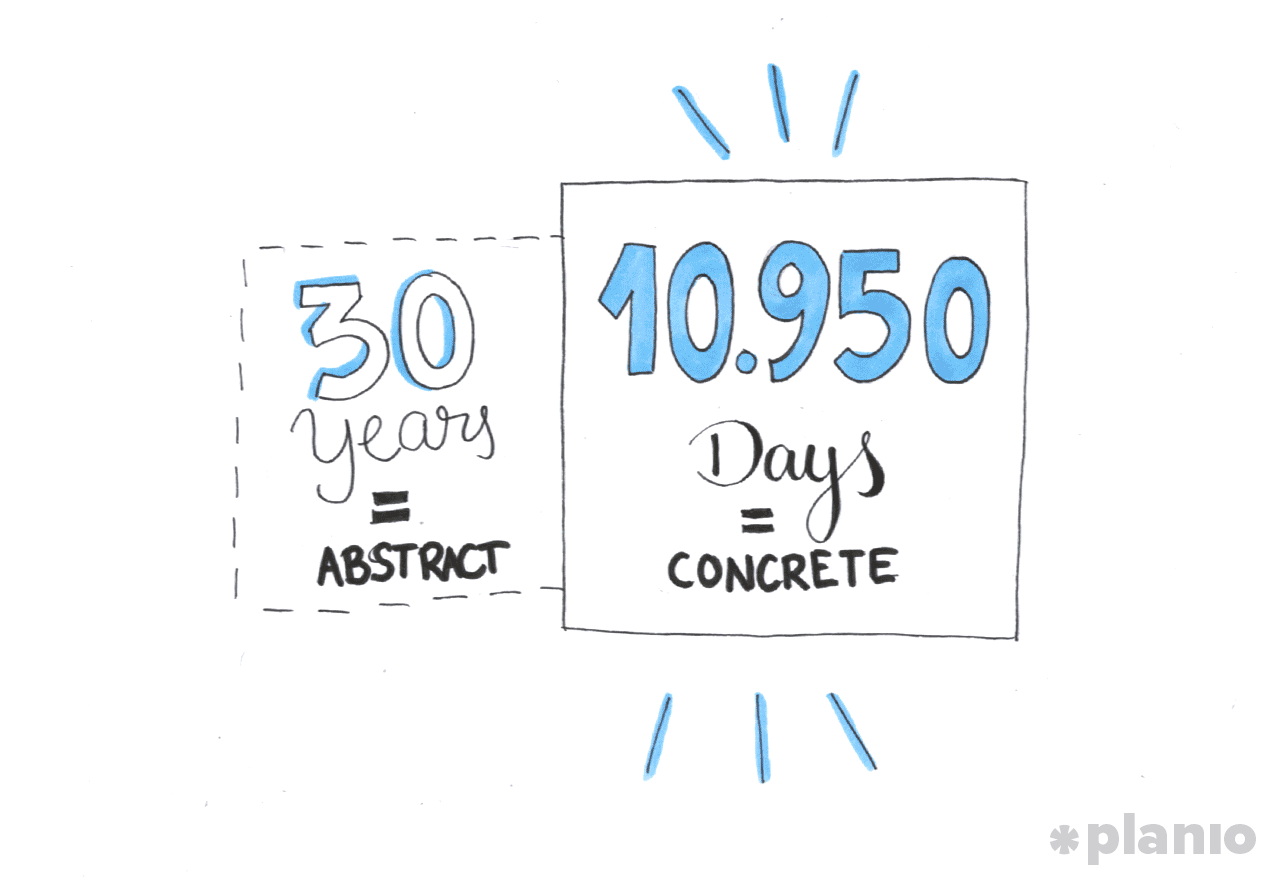 Another reason we fall prey to the planning fallacy is that deadlines seem abstract when they're far away. A deadline of tomorrow or next Thursday feels immediate and concrete. But a deadline that's nine weeks or six months away is more abstract. It's hard to plan how your work should change today when you're thinking about a huge project that needs to be finished months from now.

A study tested this approach by asking participants how soon they would start saving for various events that were due to start in the future. For instance, for college that started in either 18 years or in 6,570 days, or for retirement that would start in 30 years or in 10,950 days.

The study found participants planned to start saving four times sooner when the deadline was expressed in days, rather than years. Numbering the days made the deadline seem closer and more concrete.

Simplify your task or project 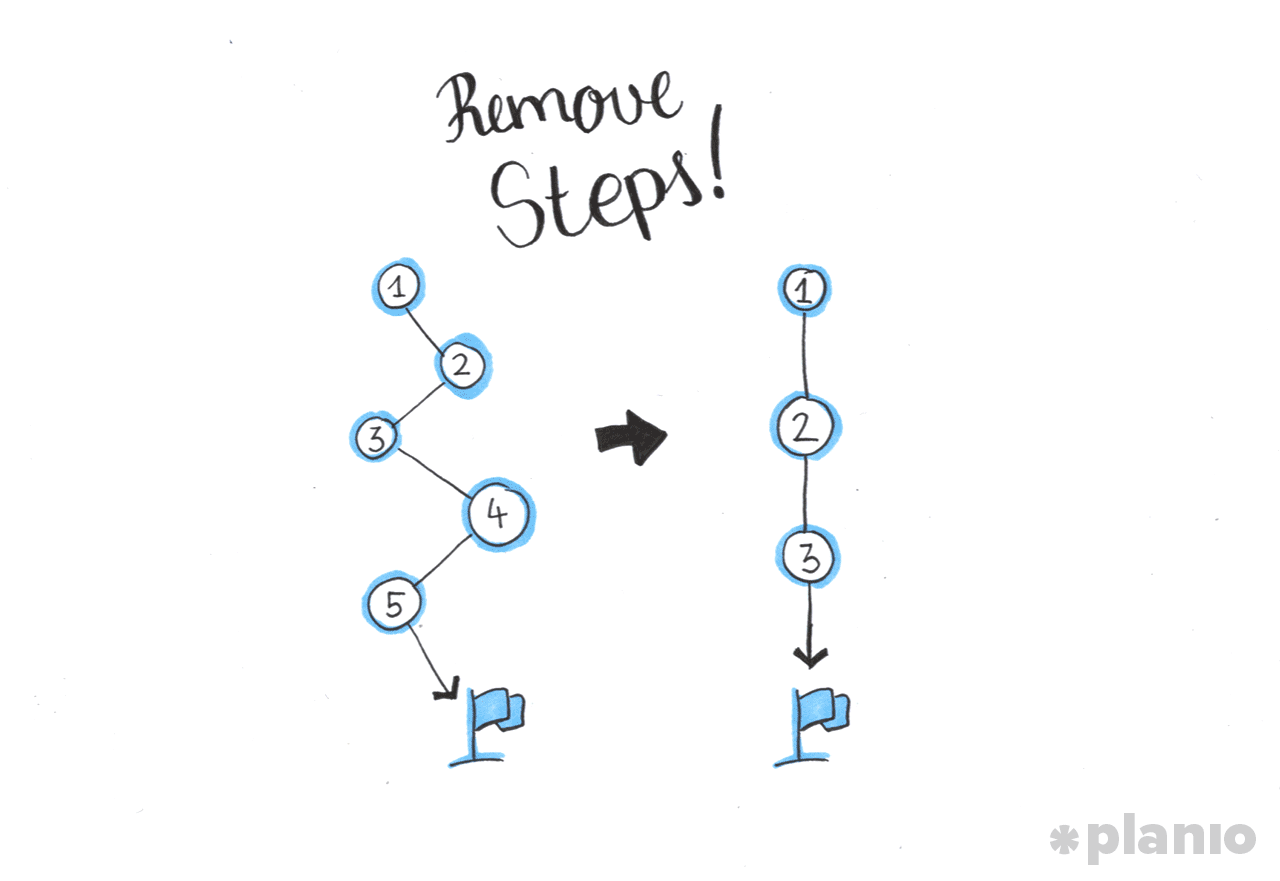 There's one part of the planning fallacy that makes immediate sense when you hear it, but is often overlooked. It's this: compound probabilities make estimates harder.

To put that in different words, it means the more steps your task or project involves, the more opportunities there are for something to go wrong.

The more steps your task or project involves, the more opportunities there are for something to go wrong

Unfortunately, we're not very good at taking this into account. We might think carefully about all the steps in a project when making a plan to get it done, but we don't think about what could go wrong at every step.

Since we're not very good at this, we can help ourselves out by removing as many steps as possible. Knowing we don't do well at estimating the potential hiccups at each step, we can reduce the likelihood of a hiccup occurring at all by taking out any unnecessary steps.

Unfortunately, we can't completely stop our subconscious minds from leaning on cognitive biases like the planning fallacy. These so-called flaws in our thinking actually help us when making quick decisions, but they tend to affect our thoughts without us realizing.

The good news is that being aware of how cognitive biases affect us can help us be on the lookout for them, and change our behavior to compensate.

Next time you struggle to hit a deadline, or notice a task taking much longer than you'd expected, check if the planning fallacy caught you out. If it did, build these approaches into your planning method for next time, and you may just be able to thwart your own brain. 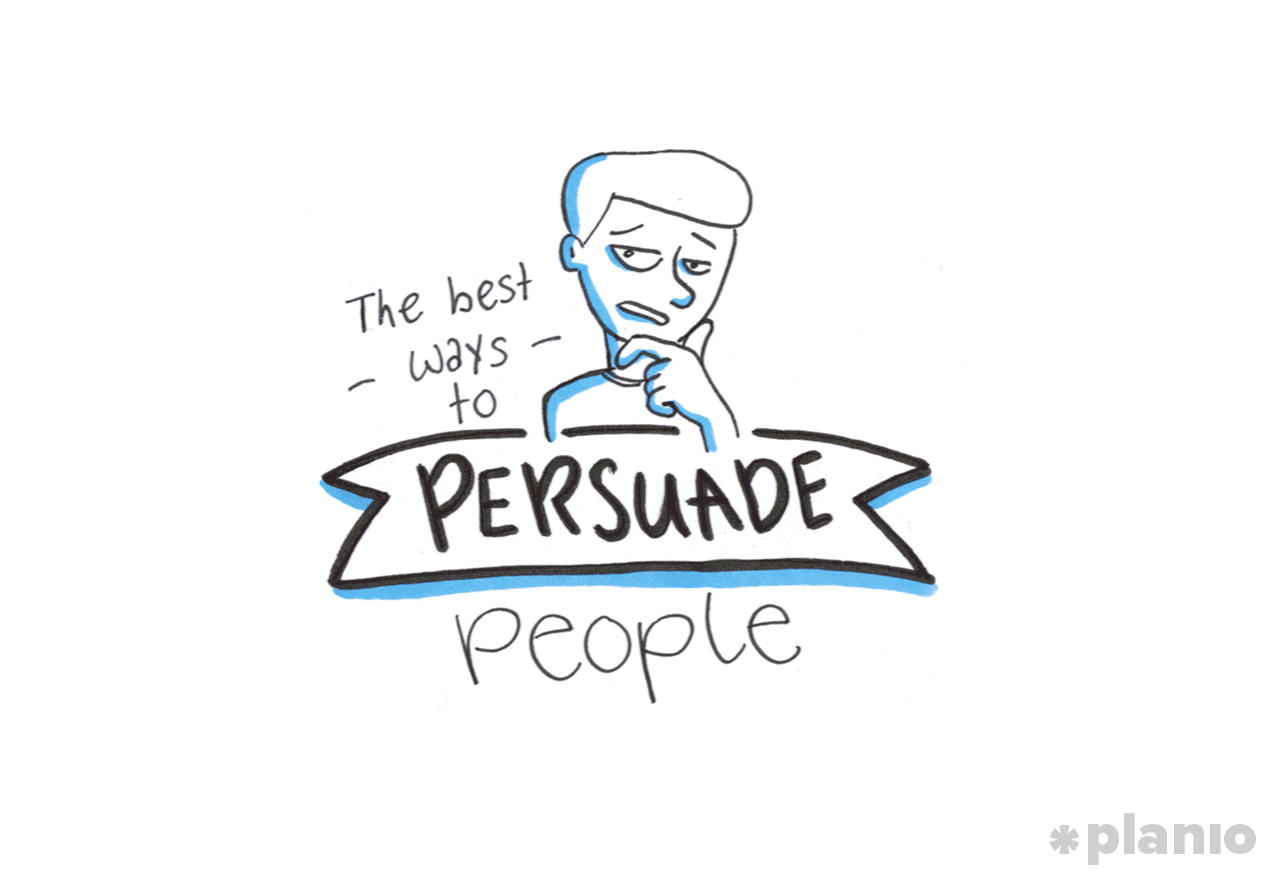 The best ways to persuade people 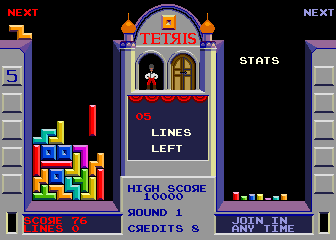 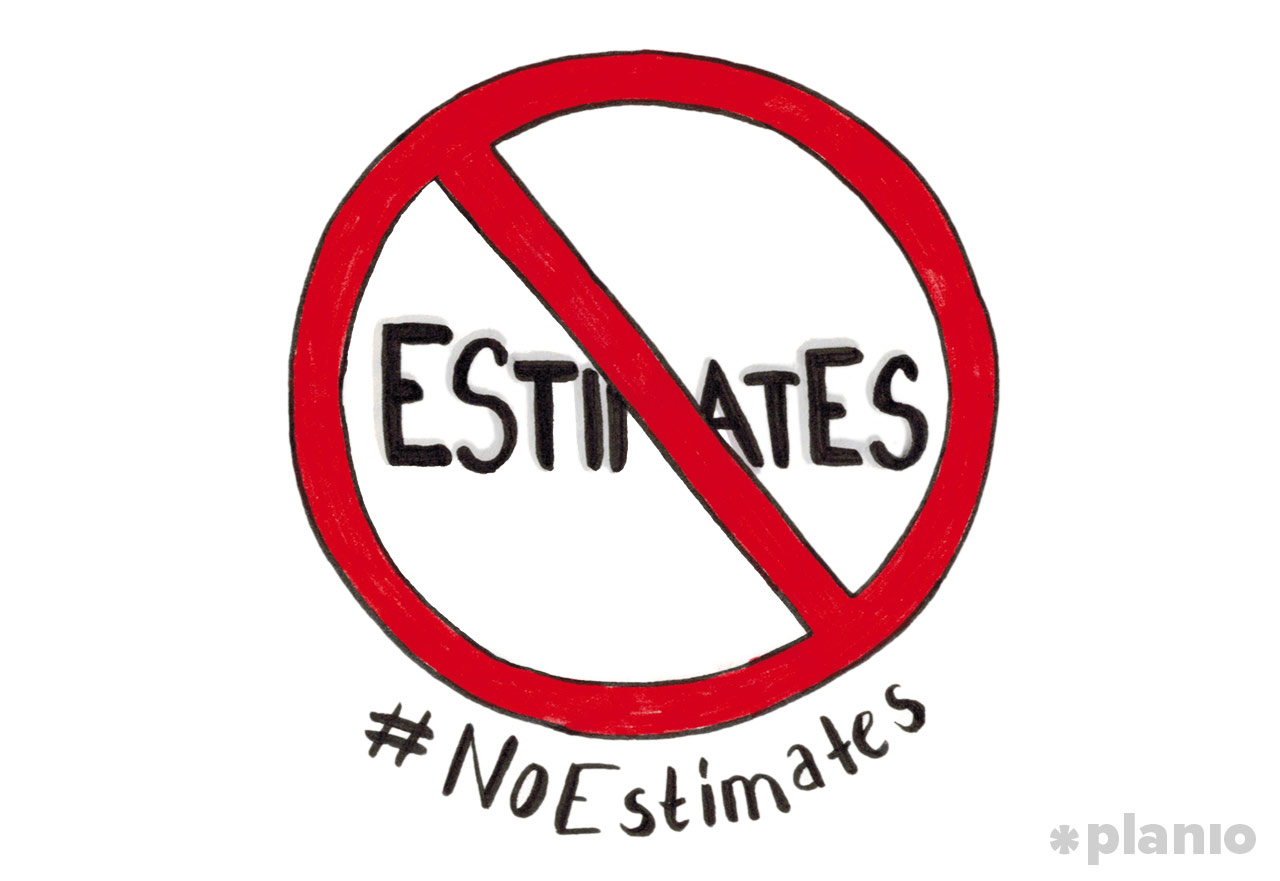 #NoEstimates: 6 Software Experts Give Their View on the Movement