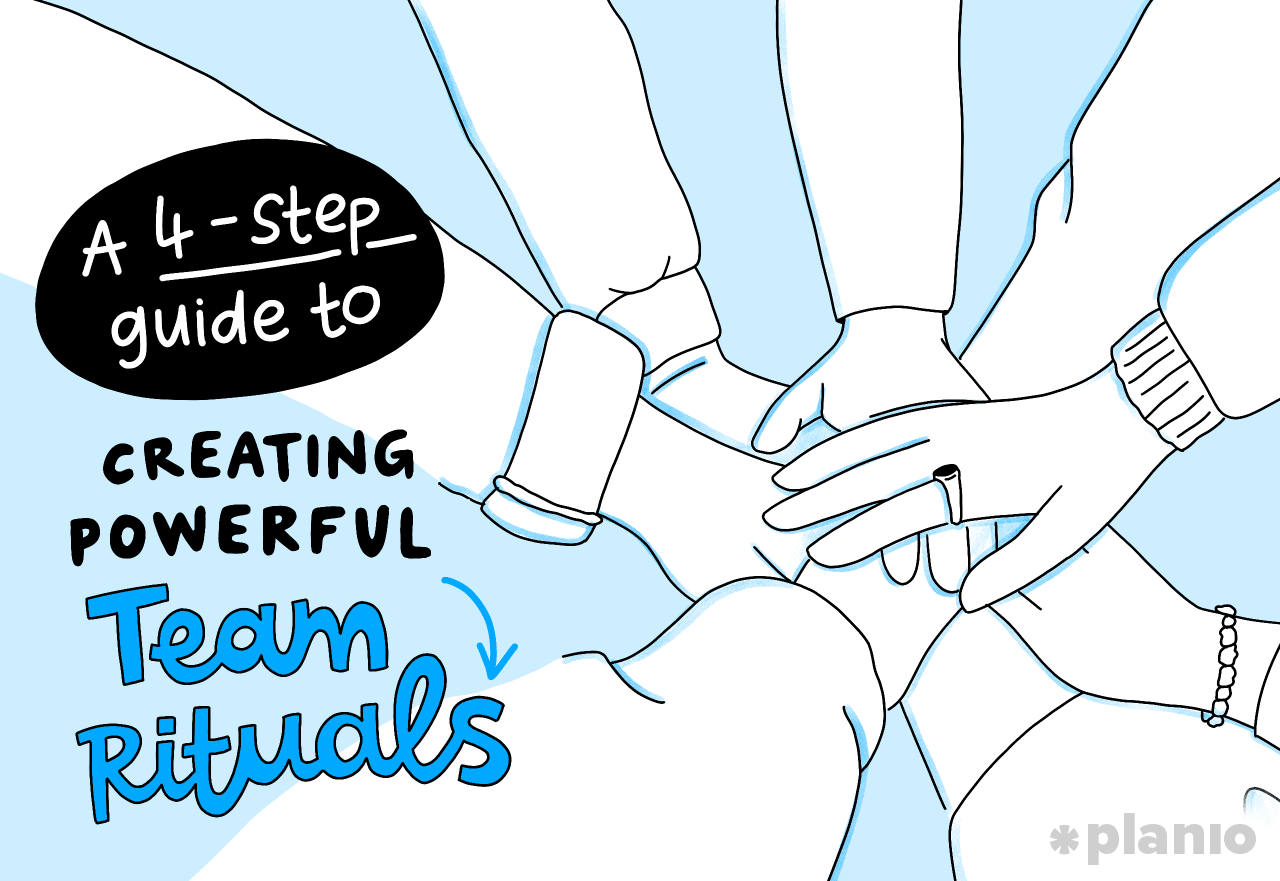 When it comes to productivity, routines and habits get all the attention — but high-performers rely just as heavily on having powerful rituals in place.

Rituals tie your team together, creating a shared purpose and a powerful culture. While everyone has their own routines to help them maximize productivity, team rituals create a sense of togetherness and motivation that takes performance to the next level.

Unfortunately, rituals seem to be solely reserved for sports teams, with businesses either ignoring the power of rituals or relying on outdated ideas that simply miss the mark. (We can all agree that WeWork’s infamous “Thank God It’s Monday” dance parties haven’t aged well.)

Jump to a section:

The best team rituals aren’t embarrassing public acts or shrouded in mystery. Instead, they’re shared experiences that every company — big and small — can benefit from.

In this guide, we’ll explain the power of team rituals, the real benefits you’ll see once you start practicing them, and then provide a four-step guide to creating new rituals for your team.

What are team rituals?

When people think of rituals, they naturally jump to religious or ceremonial acts. But that’s not the case with workplace team rituals. Instead, here’s a better definition for team rituals:

“Team rituals are a repeated set of behaviors, actions, or interactions designed to improve the collective success of a team. Team rituals have the power to bring people together around a joint purpose, meaning, or set of values.”

Each organization, or even team, will have its own rituals designed to bring them together, improve collaboration, and drive them toward a shared goal.

While different rituals exist in different businesses, they all share similar qualities. As Bing Gordon, founder of Electronic Arts, famously put it:

“Every team has a set of golden rituals with three key attributes: they are named, they are templated, and every new employee knows them by the end of their first week.”

To truly understand team rituals, let’s break that down into more detail.

Free your time from busy work and get organized.
Use Planio

Rituals vs. routines vs. habits: What’s the difference?

While that definition of rituals is helpful, it doesn’t necessarily differentiate them from habits or routines. Crucially, what separates the three is the energy and consciousness associated with each one.

Team rituals take energy to complete, but come with a high level of consciousness that is underpinned by a meaningful sense of purpose.

On the other end of the spectrum, habits happen automatically - almost without thinking - yet don’t carry the same level of purpose. While routines sit firmly in the middle between the two.

Here’s a breakdown of the differences between habits, routines, and team rituals:

Done right, team rituals are a powerful way to build togetherness and shared values within a team. Team rituals are a key building block for team culture, too, contributing to other factors such as team motivation, employee well-being, and collective performance.

Team rituals take energy to complete, but come with a high level of consciousness that is underpinned by a meaningful sense of purpose.

The science behind why rituals work

Given rituals strike at an emotional level, it’s no surprise that there’s a lot of psychological research into why they’re so effective.

Here are three reasons rituals work in both day-to-day and professional life.

1. They help relieve stress and anxiety

At times, the workplace can be a stressful place to hang out. Whether it’s pressure to hit targets, nerves before a big meeting, or feelings of anxiety when around others, rituals have proven to reduce stress levels in a wide range of scenarios.

For example, in a study by Harvard Business School, performers were found to have a reduced heart rate, experience less anxiety, and perform better after completing a pre-show ritual.

On the flip side, rituals also help people feel more confident in themselves and their abilities. Given rituals are deeply emotional, they’re shown to help give people a lift when they need it most.

Many studies have observed this in the world of sports, where pre-match rituals improve emotional stability and confidence in athletes.

3. They create a shared experience

If you participate in rituals as a team, it helps boost qualities such as trust, togetherness, and respect through a shared experience. This is especially true in stressful environments, such as a post-growth startup or a project team, where high-intensity, meaningful work builds stronger bonds.

Rituals help tap into our consciousness at an emotional level, giving us a boost, bringing comfort, or providing relief when we need it most. This quote from Maria Popova, the found of Brain Pickings, perfectly distills why rituals are so powerful:

“While routine aims to make the chaos of everyday life more containable and controllable, ritual aims to imbue the mundane with an element of the magical. The structure of routine comforts us, and the specialness of ritual vitalizes us.”

Now that we know why rituals are so powerful, it’s time to explore why they matter for you and your team.

While you always want an element of feel-good, there are some operational benefits you’ll see by embracing team rituals, such as:

How to create rituals for your workday in 4 steps

Team rituals may already exist in your organization, either from past team members or from new team members transfering ideas from previous companies. But, if you want to think outside the box and bring in something new, here’s our four-step guide to creating fresh team ritual ideas. 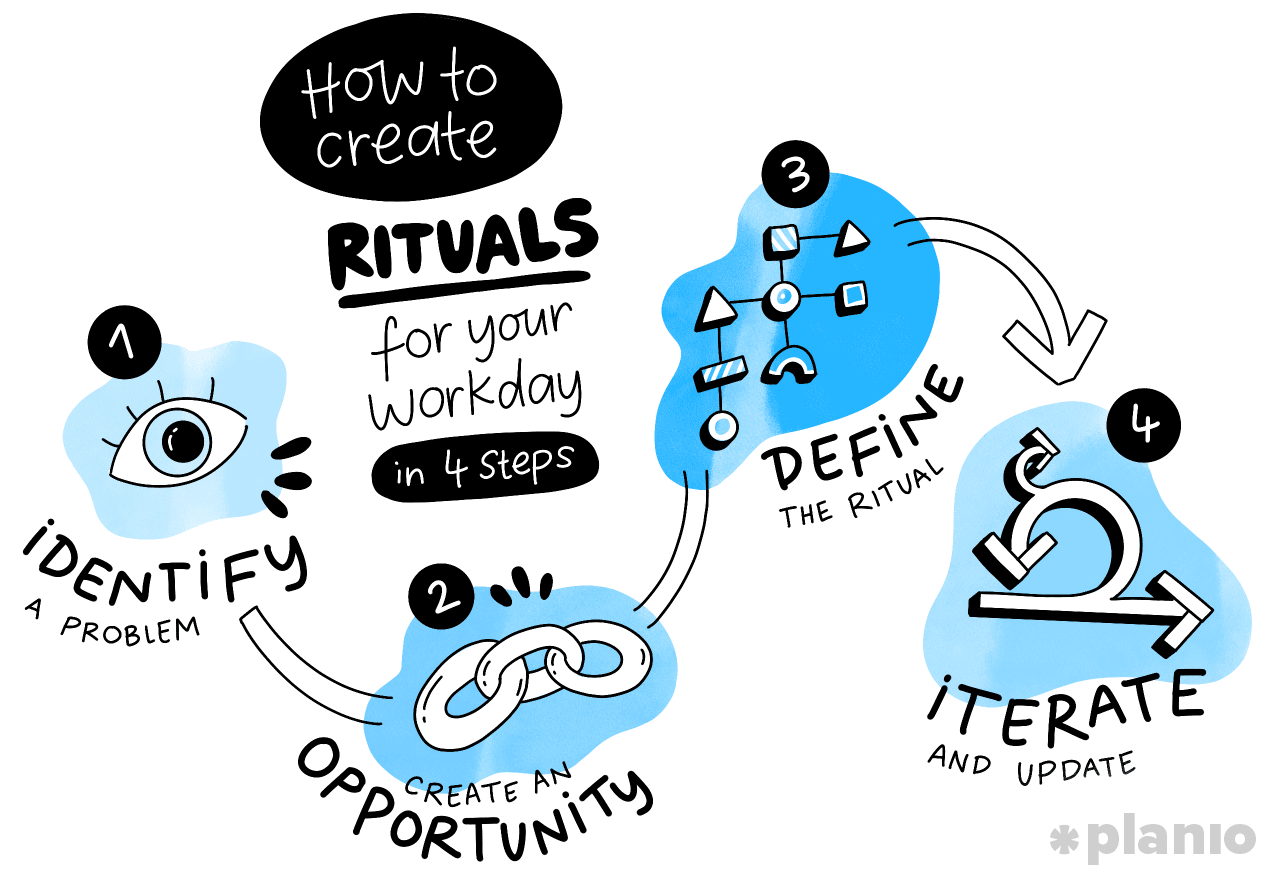 1. Identify a situation that is tense or needs improvement

The easiest way to come up with a new team ritual is to identify a problem situation that exists within the team. This could be an area of inefficiency, or it could be a fundamental error/conflict the team regularly experiences.

Jenny has just started working for a new software development team. The team works in a high-pressure environment, releasing new software upgrades weekly to over 200,000 users.

Jenny notices that if any of the developers accidentally release a broken line of code into the production environment, the team's mood and productivity drop for days afterward. Given the volume of work, it’s inevitable this will happen regularly, so she must find a solution.

2. Use the “how might we” framework to turn your problem into an opportunity

Every problem you identify is actually an opportunity to create a positive team ritual. This is an easy way to spin the situation and create a new ritual in the team that can reshape the way you work, the team dynamic, and the emotional connection with your goals.

Jenny defines her problem statement as “broken code in releases that causes a bad team environment,” and tries out the following HMW questions:

To help, Shane Snow defines a great team ritual as:

“Something our group does that’s our thing, which we do repeatedly and consistently, and which doesn’t step on people’s individuality.”

Jenny wants to run with the “How might we make light of broken code in releases that causes a bad team environment” opportunity statement.

She wants to ensure that when a broken code event is identified (trigger), the individual doesn’t feel guilty, and the team doesn’t feel like there’s a culture of blame (outcome). Jenny doesn’t like having regular formal meetings, so she wants the ritual to be a fun event (format).

Jenny decides that when a bad code release happens, the developer responsible will wear a funny hat in the office for a day, and she, as the team leader, will buy biscuits for the team to “celebrate” the mistake. She hopes this will lighten the load for the individual and create a positive environment for the wider team.

If you want to connect as a team, boost productivity, and improve creativity, team rituals are exactly what your team needs.

4. Try it out and iterate

With your new team ritual defined, it’s time to test it with the team. Don’t be afraid to jump in and try it out, taking the time to observe the results. As you go, get feedback from the team to ensure they’re bought into the idea and enjoying it. Make updates and changes as you go.

Jenny shares her observation with the team regarding the bad code. The team agrees that when it happens they do feel dejected and guilty for the mistake. Jenny wants to implement a no-blame culture and the team thinks the ritual is funny and agrees to give it a go.

Over time, Jenny plays around with the format to make it work better for the team. She notices the team’s mood improves, and additionally, the occurrences of broken code decrease altogether, owing to the team being more relaxed and connected.

5 examples of team rituals you can start using today

If you’re still scratching your head, looking for ritual ideas, here are five great ones you can get started with straight away.

Rituals and routines power the most productive teams

Powerful team rituals don’t need to be reserved for elite sports teams. If you want to connect as a team, boost productivity, and improve creativity, team rituals could be exactly what your team needs.

And just like workplace routines, the key to effective team rituals is organization. Planio keeps your team on track with task management, planning and reporting, knowledge management, and team chat.

Try Planio for yourself — free for 30 days (no credit card required!) 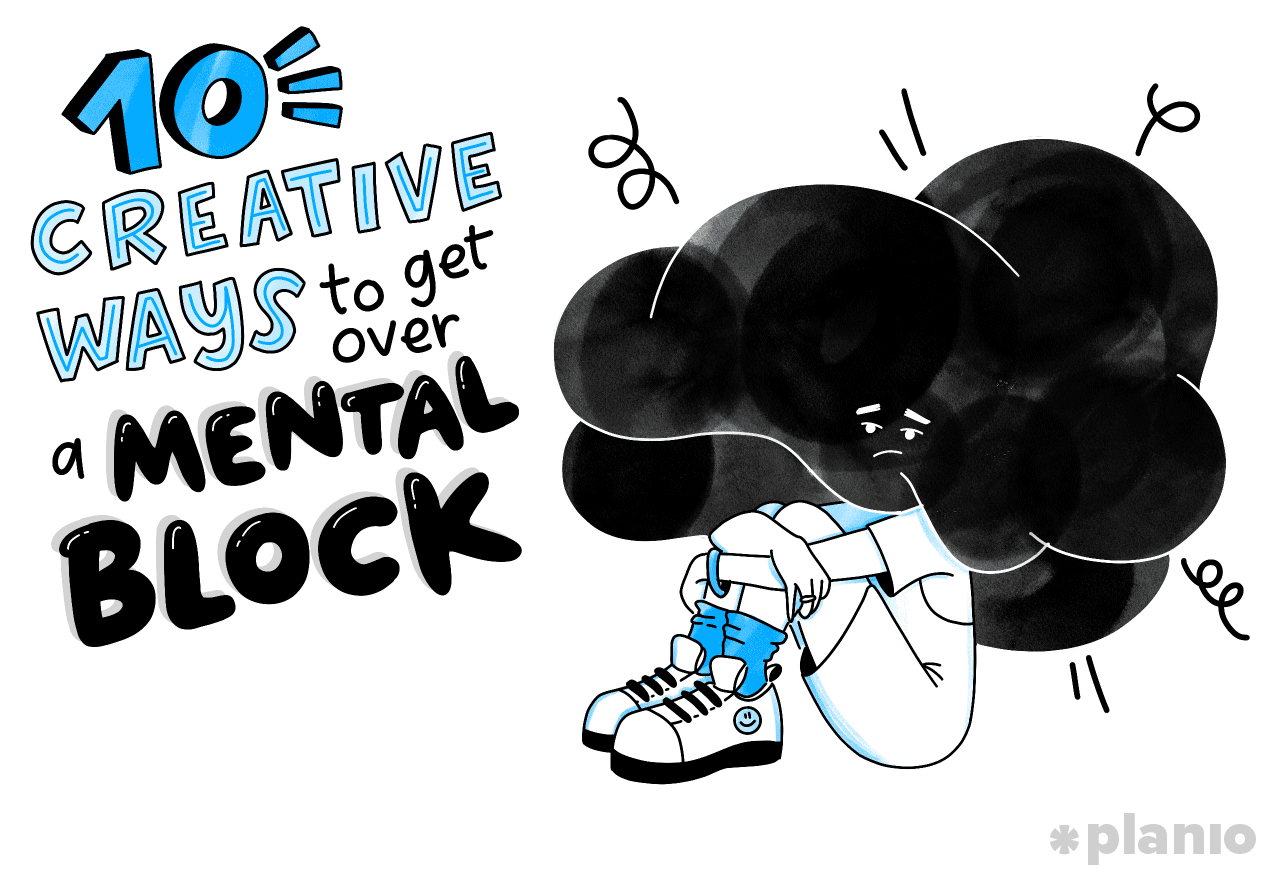 10 creative ways to get over a mental block 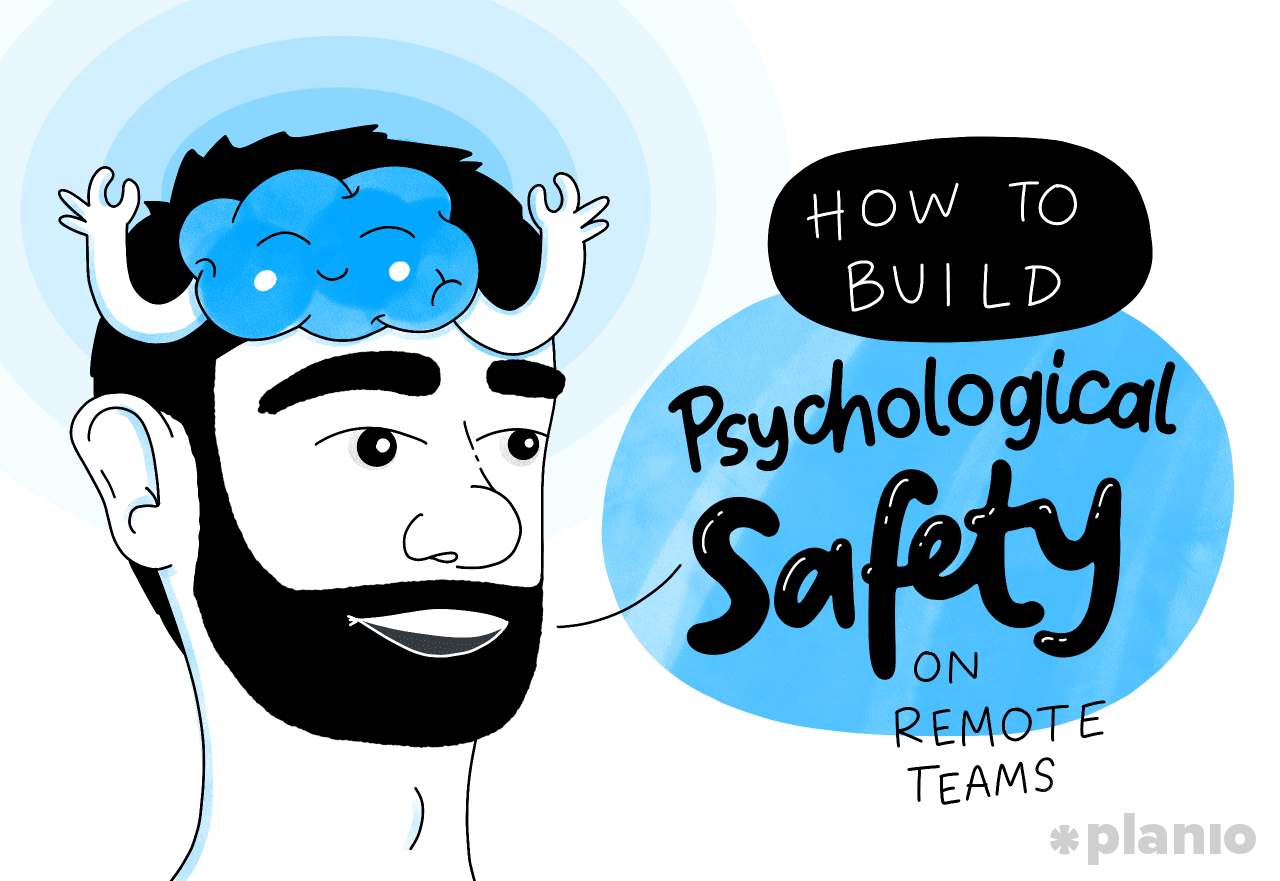 How to build psychological safety on remote teams 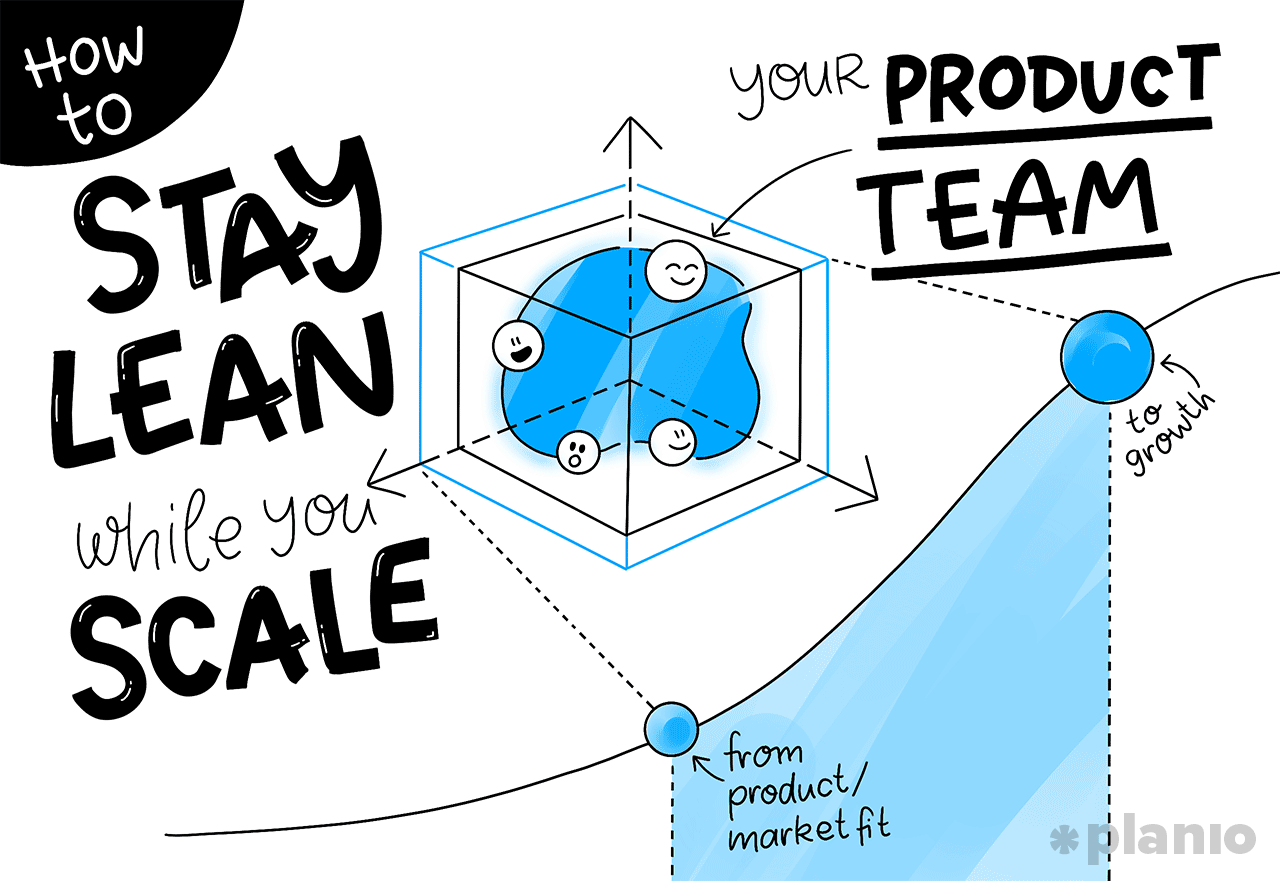